Annually Emms Transport of Doncaster provide a Stage trailer to the Westwoodside Pond Light committee and 2015 was no different. The committee in partnership with local schools the Isle of Axholme in particular Westwoodside Church of England school organise the annual Christmas Lights to be switched on.

The event takes place with a local gathering around the Pond, food is provided and the Schools decorate the stage trailer with Christmas Decorations for the concert to be performed by the children once the lights are switched on. 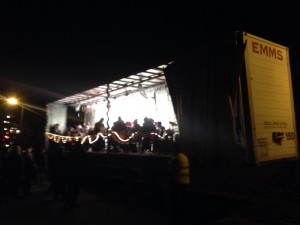